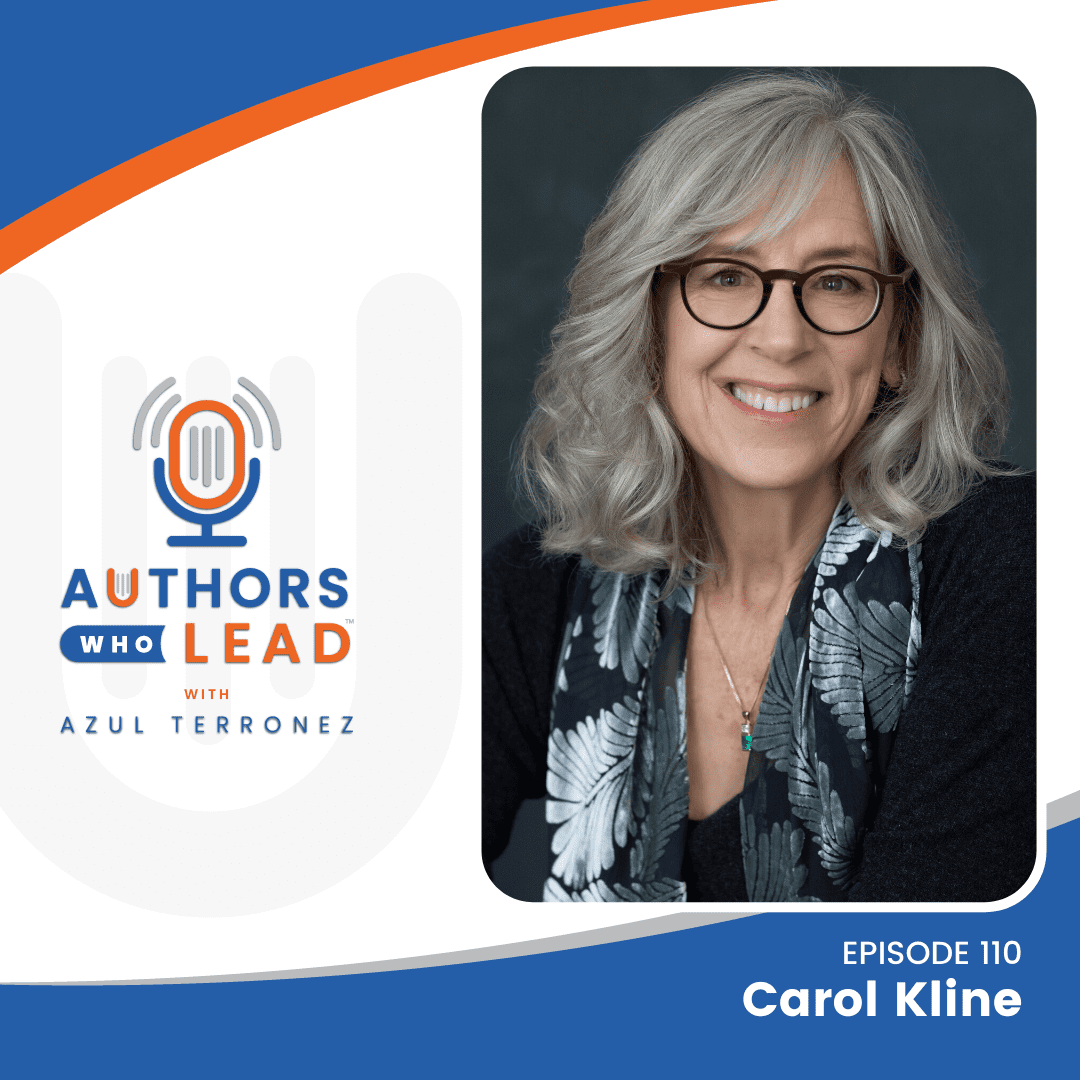 The Power of Conscious Luck

Over the last 25 years, Carol has co-authored more than a dozen books with some of the world’s top transformational leaders – including Jack Canfield and Mark Victor Hansen of Chicken Soup for the Soul fame, Marci Shimoff, Lisa Nichols, and Gay Hendricks. Those books include Happy for No Reason, Love for No Reason, You’ve GOT to Read This Book!, The Ultimate Dog Lover, and The Ultimate Cat Lover, as well as five books in the Chicken Soup for the Soul series.

Her latest book, Conscious Luck: Eight Secrets to Intentionally Change Your Fortune, co-authored with Gay Hendricks, is being released on May 12, 2020.

What We Discuss with Carol Kline:

Carol didn’t start writing until her later 30s although she has always been a reader as a child. She’s that kid that went to the library with a red flyer wagon, filled it with books, and came home and read while eating corn on the cob. She was just immersed in books.

Her friend then got the contract with Jack Canfield to write Chicken Soup for the Woman’s Soul. Carol was asked to do library research and inspiring stories about women. So she looked for these people and interviewed them. She would then sit to meditate the afternoon after she read a story or interviewed somebody. The first line of the story would always come, and it would just set the feeling for the rest of the story.

Carol learned what to ask in interviews and that became extremely important as a Chicken Soup for the Soul co-author because those books involve people on a visceral level. That didn’t happen by accident. It usually happens with some level of sensory input. Write and imagine as if your story is a movie.

There has to be a level of writing that actually stirs the emotional brain.

Having had no prior writing experience, this experience of getting inside a story and what made it come alive was how Carol became a Chicken Soup for the Soul editor.

Her friend also recommended Carol to another Chicken Soup for the Soul co-author because she was a pet lover. Carol wanted to be the co-author, and although a bit scared, she mustered up the courage to ask the author who told her it wasn’t going to happen. You have to ask for what you want when it’s scary. Find that 20 seconds of insane courage to hurl yourself through a window of opportunity.

A lot of times luck starts with overcoming fear and putting yourself out.

It was the biggest fork in the road in Carol’s life professionally and personally because she did not back down. And that was the first of the six Chicken Soup for the Soul books she co-authored. Then she went on to write self-help books, selling millions of copies – as a result of that one moment of summoning her courage to overcome fear.

The book Conscious Luck was a beautiful collaboration between Carol Kline and Gay Hendricks. It was basically Gay’s work and then Carol’s work with Gay. So it became a “we” voice. Gay wrote the first three chapters. Then Carol interviewed people and wrote stories. The process was Gay is the expert and Carol was the student who chronicles her journey. Marrying those into a book was just powerful.

So much of luck is in your control. So much of it has to do with the combined results of your actions, your associations, and your attitudes.

As Stanford professor Tina Seelig says on her TedTalk, “Luck is not an isolated dramatic lightning strike, which most people think. It’s actually a wind that’s always blowing. And it’s up to you, by your behaviors, beliefs, associations to create a sail and harness that wind of luck.”

Carol’s goal as a writer is to understand it so well to bring it like a ramp from her understanding to someone who’s never even thought about it before and not miss them. Her goal is to always make it land to the reader in a way that’s useful.

If you speak at your level without building around to your audience, you’re going to have a problem because they will not understand you. They will not relate to you and your book will go above their heads.

[17:29] Turning Shame into an Attractor Field for Luck

The human body has an orientation towards somatic psychology towards the mind-body complex. It’s not enough just to psychologically deal with somebody. You have to deal with the imprint in the body.

One of the ways that you get to the right place at the right time is also being centered in your body. The shame-to-luck attractor has to do with finding where shame is squatting in your body.

There’s also a distinction between guilt and shame. Guilt is when you feel bad about things you’ve done. And shame is when that guilt becomes subterranean and extrapolates. You internalize it to who you are – not that you did something bad but you are bad, that you are worthy that you are ashamed of who you are.

Most of us have been shamed but not in a multipolar, malicious way by our parents and our teachers. It’s to stop us from making mistakes and hurting ourselves. But that shame lives on in our psychology, it goes underground and it lives in your body.

Shame is like dark energy in your body that you’re holding and not even aware of it.

You’ll find there are places of shame that you hold on these emotions in your body. Gay actually figured out a way just to turn them into the light. When you take that darkness and you process that, you digest it through your own awareness, you can turn shame and any negative emotion holding the body into a light-filled place that becomes an attractor for all the things you want in your life. In the book, Gay came up with a meditation process to do this.

Co-authoring can happen in many different ways. Sometimes it involves ghostwriting. In some books, one of the writers is the marketer and one of the authors is a writer. Writers can write the whole thing and send it to someone.

There are so many different ways you can write a book with someone.

Carol recommends doing this chapter by chapter. Her whole process is about getting clear before you start writing. She’s a huge proponent of writing before you have an outline.

You have to be able to do the heavy lifting. And you can do that together, or you can do it apart and then come together and brainstorm. You can do a mind dump and then put it in order and see where that led.

Carol would interview people and write their stories and they had to be different. If it all sounded like one person, it would get boring to have to really listen to how they construct sentences, what kind of adverbs and adjectives they use.

You have to actually pretend you’re them when you’re writing in some way and just almost channel them.

You have to decide to be lucky. You have to commit to being lucky because it’s a mindset thing. British professor Richard Wiseman has a whole body of scientific literature on luck. It is so clear that lucky people actually see opportunities. They’re open. They trust themselves.

Many people have this inner conditioning that luck is something for other people or that it’s not in their control. That’s hard to change once you identify it and realize that it’s a habit of thinking.

Curses have lived in the background of our lives, in our thinking, and have become mental conditioning. And successful living is effectively lifting these curses. You have to learn to let go of things without wrestling with them because when you’re holding on to it, you’re resisting it.

You’ve got to give luck a reason to visit and luck chases worthy goals.

Over time, the consistent repetition of this gentle release of old beliefs and the conscious recommitment to the desired ones will create new neutral neural pathways, making you embrace your lucky life automatically and effortlessly.

People make tiny decisions every day and they are cumulative. And we don’t realize that these little things create a habit of life that’s either going the wrong way or the right way. Awareness is key.

[36:55] How to Practice Your Everyday Luck Changing Habits

Take bold action to do things a little differently. If you get in a rut, mostly because it’s an efficient rut. It’s an effective rut. You found out the way to do something and you do it that way. You go to the best route to your work, you dress a certain way because you think it looks good. You eat certain foods because you’d like it. But you don’t open your mind, your heart, and your eyes to other ways of doing things.

All the luck researchers confirmed that taking a chance – taking a risk, saying yes to things you normally say no to, mixing up your routine, doing things differently – actually helps you not only to see new things because you’re going a different way or you’re meeting new people, but you actually see with new eyes if you’ve been on autopilot.

Creativity and presence are in those moments where you’re not distracted. And that seriously can affect your work.

You want your brain to help you see the things you need to see literally perceive because it screens out millions of bits of information because it only does what you tell it to do.

We spend our lives taking care of putting out the fires and doing what’s urgent, and we forget what’s important to us. Just take a moment and it will change your life.

You have to start your internal GPS which is comprised of three things:

Essence pace is when you are moving through space in a way that you stay centered physically, where you can smile the sincere smile. It doesn’t mean you’re moving slowly, you can do this at a clip – but you are conscious.

[46:29] Start Counting at One Again and Radical Gratitude

You have to learn the art of not beating yourself up. No one ever got the true wisdom or happiness through beating themselves up. It’s an overlay that just is counterproductive. Just recommit in that moment to what you want and learn to do that gently with humor.

If you feel lucky, then you’re lucky. Radical gratitude is about learning to ask in the spirit of the most gentle, curious inquiry.

Even a sliver of authentic gratitude is going to shift that victim mentality, that feeling of upset, and feeling like you’re unlucky.

Chicken Soup for the Soul books

You’ve GOT to Read This Book! by Jack Canfield and Gay Hendricks

Tina Seelig’s TED Talk: The little risks you can take to increase your luck