You Don’t Need to Protect Those Who Harmed You

“That’s the moment that I’ve realized you’re meant to take all of these things that have happened and you’re meant to help other people. Realized that they are not a victim of their circumstances and that life is all about choice.” —Jill Krzyzanowicz

Jill Krzyzanowicz reached a point in her life where she felt that her life story needed to be extracted from “deep within,” even if only for herself. She then went searching for an author coach, and we ended up working together on her book. Through the visual map exercise, she realized that her story could be a healing journey for others as well as herself.

In this episode of “Authors Who Lead,” I talk with Jill, writing as Margo Reilly, about her book, When the Apple Falls Far from the Tree: Discovering the Gifts Within the Chaos, her writing and publishing journey, and the transformation she went through.

How to Decide What to Include in a Memoir

Often when authors are writing a memoir, one of the most often asked questions is “What should they include?” A lot of these stories involve other people, family members, abuse, trauma, and other sensitive subjects or events. There are definitely many ways to deal with this, and I advise authors to just get it all out on the page in that first dirty draft. Then you can go back and decide what to include.

When Jill sat down to write her memoir, she first decided that she would not include anything that involved her siblings. Instead, she honed in on those good and bad events and experiences that shaped her own life through all the trauma and abuse. She was able to find the “silver linings embedded within” her story to share.

The Challenges of Writing a Memoir

The hardest parts of writing Jill’s memoir were recalling things that were suppressed inside her and knowing that, honestly, she would hurt some feelings as she told her story. As hard as it was to relive her trauma and abuse as she wrote, she was surprised how much forgiveness she had inside her. Instead of completely resenting those who caused her harm, she felt hope that they had faced what had happened and were healing as well, despite the hurt feelings.

You Don’t Have to Protect Those Who Harmed You

Jill still lives and teaches in the same community she grew up in and writes about. Although she wrote her book for herself, she realized it was meant to help heal even though it would hurt others. Her pen name protects some of the people in her story, but she also gave herself “permission to know that [she] would be touching more people than [she] would be making upset.” This gave her the green light she needed to tell her story and help others in similar situations.

How Your Book Can Transform You

I always tell authors that writing a book will transform you. Jill’s journey of transformation was one of healing and forgiveness. She forgave those in her past and now didn’t allow the trauma to define her. This is when she realized she was writing more of a memoir. She felt it was the start of a spiritual awakening where she found herself again and felt she was meant to take all of the things that happened to her and use that to help others.

It took Jill two years to write her book. Part of that time was during Covid, so she was stuck at home like the rest of us, which was good and bad. She had the time to write, but she was alone as she was reliving her past trauma and emotions. She learned through that journey to give herself grace and not push herself with a strict timetable. This allowed the manuscript to unfold comfortably, and she experienced an epiphany that changed the way she organized the impact of her chapters.

After Jill finished writing her manuscript, she found an editor that was into her type of writing. She wanted her book to be read through the lens of “somebody who would appreciate the spiritual awakening aspect of it.” As she was editing, Jill needed to decide how to publish. She had always had a dream of publishing a book someday with Hay House. As she did her research, she found Balboa Press, which is a subsidiary of Hay House, so she decided to work with them.

Advice for Others Writing a Memoir

Jill’s advice for others wanting to write a memoir is to just get started writing. It will be transformative and hard at times, but rewarding. Everyone should have the opportunity to have the type of transformative experience that writing a book can bring. All the decisions about what to include or not can be made after you have a complete manuscript.

If you would like to write a memoir that makes an impact, remember these greatest takeaways from my conversation with Jill:

What was your biggest takeaway from this episode? Are you writing a memoir? Share in the comments below!

That’s all for this week. If you have a message inside of you that needs to be written, today is the day to start. Don’t delay—take action.

Get a copy of Jill’s book here:
When the Apple Falls Far from the Tree: Discovering the Gifts Within the Chaos

PrevPrevious Episode209: “How to Write a Book That Makes an Impact” with AJ Harper
Next Episode211: “Perfect Time to Write a Novel” with Steve Vannoy and Azul TerronezNext 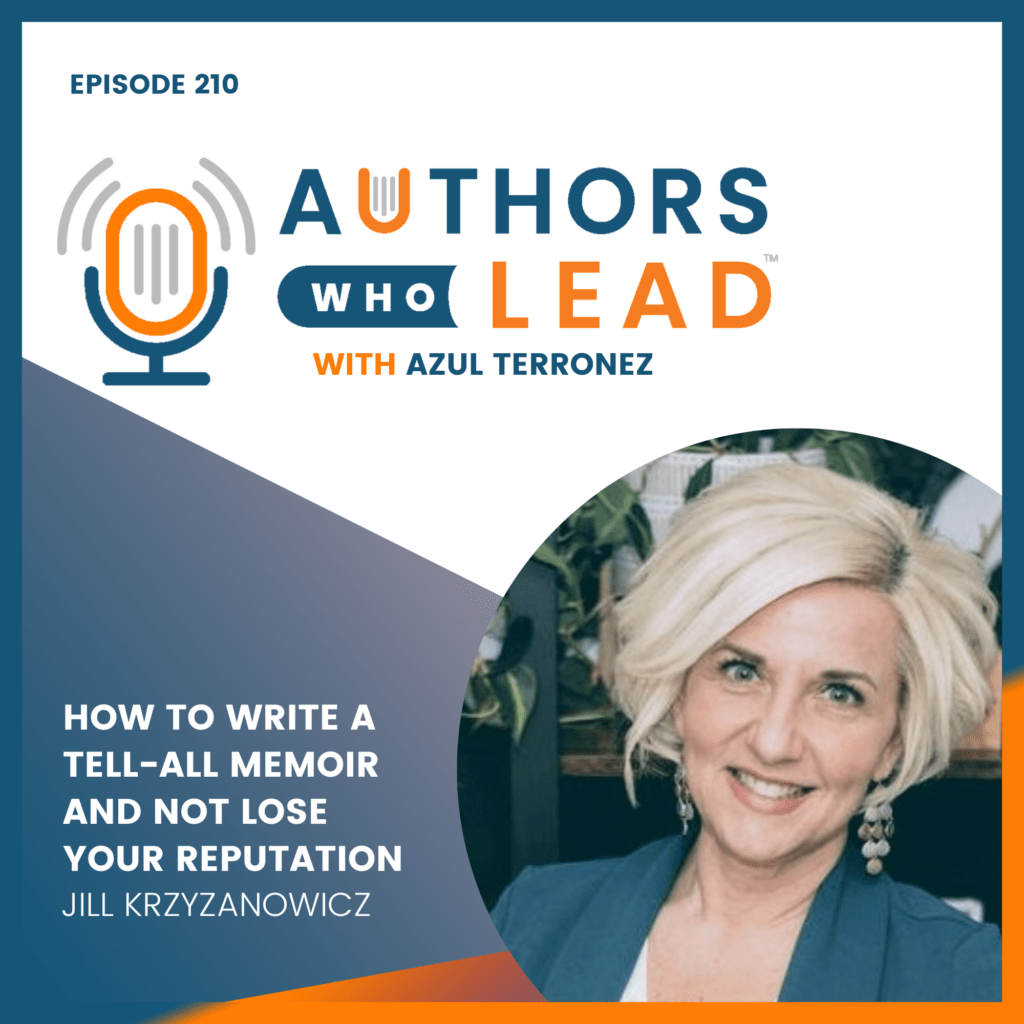 215: “How to Ensure Your Book Continues to Sell” with Richie Norton

214: “How to Sell a Million Books” with John Miller

Do You Need to Write Another Book? “If people don’t know about your book, they can’t purchase it.” —John Miller John Miller began his career

213: “How to Write a Book as a Busy CEO” with Natasha Miller

Our Personal Story Matters “I’m helping give people a voice… and that’s what this book is about. And I didn’t understand completely the responsibility and