174: “More Success by Playing the Long Game” with Dorie Clark

“For me, the concept of strategic patience, which I talk about in ‘The Long Game,’ is really critical.” – Dorie Clark

Would you say “no” to a free Caribbean vacation? Dorie Clark did.

At first, a fully paid, all-inclusive getaway with one of her best friends in exchange for a few hours of speaking sounded like a great opportunity. But what Dorie had learned over the years was that you need to look at the long game in order to succeed — and sometimes, that means saying “no” to opportunities that, on the surface, seem appealing.

On this week’s episode of “Authors Who Lead,” Dorie Clark returns to the podcast to explain her reasoning behind turning down that trip and how it relates to her newest book, “The Longest Game: How to Be a Long-Term Thinker in a Short-Term World” — an exploration of how to be successful at playing the long game and tips to find abundance in our lives.

Why Saying ‘No’ is Beneficial

The concept is simple: saying “no” in the short term can lead to long-term success, Dorie explains.

When her friend invited her to speak at a conference in the Caribbean, while the trip to the tropics was fully covered, she would not be paid for her time — and, on top of that, she was already planning to travel the week before and after. She knew she had to say “no” in order to make her long-term life happier.

Sometimes, we have a hard time seeing that the long-term choice is the better choice. This habit of saying “no” takes practice, but over time, you’ll discover that you can tolerate more long-term thinking. When we’re younger, we may not have as many connections and think we need to say “yes” in order to gain more experience and meet new people. But always saying “yes” can turn into a liability — by not seeing our own agenda and focusing the way we should be.

Why the ‘Long Game’ Is Easier Said Than Done

We live in a world of instant gratification. It is human nature to want to move fast and achieve right away — which is the opposite of playing the long game, Dorie points out.

It is also human nature to compare ourselves to others — a tendency that has exploded with social media. Instead of previously gaining a few different perspectives, that number has expanded exponentially, making it harder to choose a path and which voices to focus on.

Also, some life choices simply take longer to show results. If you see those around you getting married, having children, buying houses or accomplishing other life milestones before you, it could make you question your own choices and wonder if your long game will eventually play out. This is when you need to push through, which can be necessary to achieve what you really want.

In working with her clients, Dorie has seen just about every attempt toward success — and in her experience, the most common hindrance to the long game is the search for the “magic bullet.” Everyone wants to believe there is one thing they aren’t doing yet that would make all the difference in their journey, but actually, just staying focused on forward momentum is what’s key.

“It’s not about changing strategy,” she said.

Dorie identified as a high achiever early on — though it wasn’t until age 26 that she shifted her focus toward the long game. And that started with making peace with what she calls “strategic patience.”

None of us love to have patience, but Dorie came to realize that while our goals can take longer than we’d like to achieve, they do eventually happen, and having patience is critical.

But strategic patience doesn’t look like waiting around for your dreams to fall into your lap. It’s about taking control of your destiny by setting goals, creating conditions for success to occur, monitoring your progress, and being sure to diversify.

Dorie likes to think of herself as a Renaissance woman. She has lots of interests and it’s hard for her to choose just one to be her key focus. While some people pour all of their energy into one big project, she feels that’s a bit risky.

What if you change your mind about that one goal? Or what if that path becomes blocked? There could be layoffs, technological disruptions, or a political or economic shift that affects it, leaving you scrambling.

This is where the “20% strategy” comes into play.

As Dorie describes, you should be devoting 20% of your time to an activity that you find interesting — and separate from your career, in case it’s derailed. And she knows this strategy works, because she’s lived it.

After seeing “Cats” on Broadway, she decided she would like to produce a musical. She had no idea how to write one, so she worked this goal into her 10-year plan — effectively giving her the time to learn. She started with a simple Google search, making her way through conferences, forging connections in the field and eventually learning from experts.

Taking progressive steps toward her goal will eventually get her across the finish line — and it will for you, too. She describes being persistent and moving forward as being “directionally correct,” and advises not to listen to any naysayers.

Some people may think it’s a bit crazy to “waste” 20% of your time on an endeavor that isn’t bringing in money, but at the very least, you’ll learn something from it, make new connections and become an object of interest for pursuing a unique goal.

Why Goals Are Important to the Long Game

When we set big goals, they can be overwhelming — but if we break them into smaller milestones, it becomes easier to stay focused over time and get them accomplished.

Dorie told me an inspiring story about a woman who wanted to perform at Carnegie Hall in New York. First, she broke her dream into more manageable parts, and while her path did have twists and turns, she eventually accomplished her goal.

My husband, Steve, and I are learning the power of the long game with our own business. For the publishing side of our business, Mandala Tree Press, we aspire to publish 10,000 titles in the next 10 years. At this moment, we don’t know how we’re going to accomplish this goal, but we just have to keep taking the next best step in the long game.

And when we envision the end game, it’s amazing how the energy shifts and new opportunities present themselves.

Writing a Book as a Long Game Goal

Many authors want to sell a million copies straight out the gate, but that is unlikely. Book sales don’t just happen overnight.

I ask Dorie about her expectations surrounding her book as a long term goal. “Authoring is kind of the ultimate in long game thinking,” she said.

Dorie kept in mind two things as she was setting her publishing goals. First, she strove for the best quality book she could write — which meant it was not only well written, but also top-notch in terms of sales and reception. Second, she accepted that it wouldn’t sell a million copies and, instead, open up opportunities for her long game.

Persistence keeps us working toward our long-term goals, but the only part we can actually control along the journey is the process.

Does a Lucrative Career Hinder the Long Game?

Dorie and I both agree that there is nothing wrong with having a goal of making a lot of money. The problem comes when people shoehorn themselves into lucrative careers that they don’t enjoy — and suddenly find themselves unhappy and frustrated.

After a while, that unhappiness can bubble up and become a crisis after you’ve kept your head down for so long, focusing on what doesn’t make us tick. By this point, sometimes we don’t even know what we’re passionate about anymore. We feel stuck.

In Dorie’s book, she shares a framework called “Optimizing for Interesting.” The idea is to stop worrying about finding your passion and, instead, do what you find interesting — whether it be a new relationship, a hobby, or career. And if it stops being interesting, find something else.

Keep testing and trying different things until you do find something you’re passionate about. Find your joy and curiosity, and opportunities will find you.

As you think about your goals and how the long game can benefit your life, keep in mind my greatest takeaways from my conversation with Dorie:

What was your biggest takeaway from this episode? Do you have powerful goals, but don’t know if you’ll succeed? How do you feel about working toward the long game? Share in the comments below!

That’s all for this week. Set audacious short- and long-term goals, and write your book!

PrevPrevious Episode173: How to Have a Creative Breakthrough with Gay Hendricks
Next Episode175: How to Crush Your Fears of Writing with Madison ReevesNext 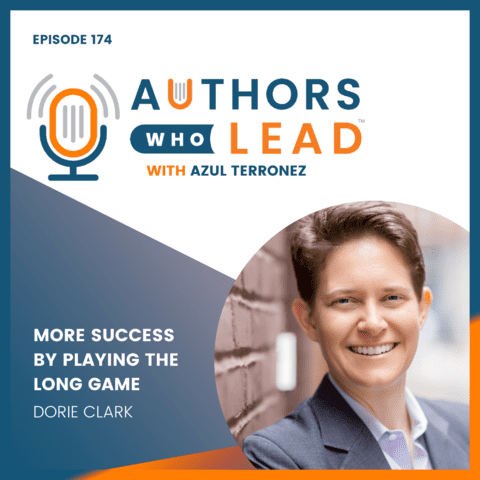 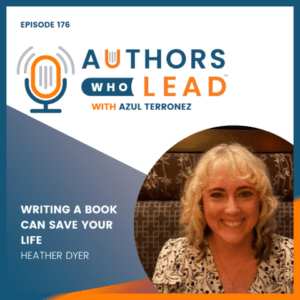 176: “Writing a Book Can Save Your Life” with Heather Lee Dyer

How to Write to Transform Your Life “As I committed myself to writing those words, my body got stronger and my mind got stronger. And 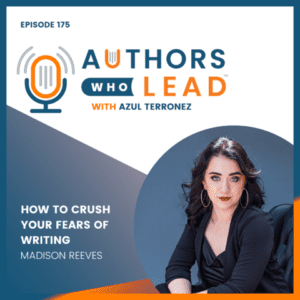 175: How to Crush Your Fears of Writing with Madison Reeves

From Trailer Park to Tesla “I always want to be able to continue to push and realize my full potential. I think that every single 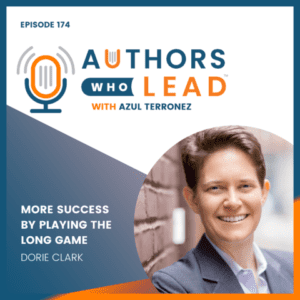 174: “More Success by Playing the Long Game” with Dorie Clark

How to Be a Long-Term Thinker in a Short-Term World “For me, the concept of strategic patience, which I talk about in ‘The Long Game,’